In 1891 British textile designer, author and socialist activist, William Morris, founded the Kelmscott Press.  It would be one of his last and most personal projects. Portrait of William Morris from the frontispiece of The Earthly Paradise: A Poem

Established with printer and type designer, Emery Walker, in a cottage near Morris’ Kelmscott House in Hammersmith, the Press produced beautiful, expensive books.  Designed to be appreciated and treasured, they were issued on hand-made paper, with text printed by hand, using a typeface designed by Morris.  Bound as finely as they were printed, each book showcased skilled craftsmanship, under threat at the time, which Morris was so keen to preserve.  Some were also hand-illuminated, a reference to the illustrated manuscripts and printed works of Medieval and Early Modern Europe that Morris was so influenced by.

Between 1891 and 1898 (when the Kelmscott Press closed), more than 22,000 copies of 53 titles were produced.[1]  Some of these were Morris’s own works, including its first publication, The Story of the Glittering Plain, concerning the quest of Hallblithe and his fiancée, which quickly sold out, along with Morris’ other 23 titles.  The Press also published editions by authors that Morris deemed personally significant, including works of Shakespeare, Keats, Ruskin, Swinburne and Rossetti. 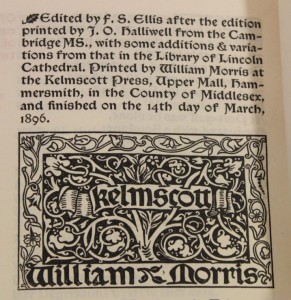 The most famous of its publications was undoubtedly The Works of Geoffrey Chaucer, published in 1896 and known as the ‘Kelmscott Chaucer’.  Of the three type styles that Morris designed for the Press, it exhibited the ‘Chaucer’, a smaller variant of the ‘Troy’ type, a gothic font modelled on that used by the early 15th century German printers.  Illustrated with eighty-seven woodcuts by Morris’ good friend Edward Burne-Jones, it was the most ornate of the Kelmscott publications and one of the finest examples of the art of the printed book.

The Press owed much of its success to editors such as Frederick Startridge Ellis, who read the Chaucer proofs, and artists and engravers such as Burne-Jones, whose illustrations appeared in it, and William Harcourt Hooper, who worked there until its closure.  Also contributing to its success, was Morris’ design consistency.  Unlike so many other private presses, which made separate design decisions for each title, the Kelmscott volumes always featured thick hand-made paper; Morris’ ideal margin proportions; durable and handsewn bindings, and old-fashioned black ink.[2]  It was this design and quality of craft that made a Kelmscott publication so instantly recognisable.

After his death in 1896, Morris’ literary executor, Sydney Cockerell, closed the Press to preserve the integrity of Kelmscott publications.  It took well over a year to finish all of its existing projects. Published in 1896, just months before William Morris’ death, The Works of Geoffrey Chaucer, is the last and most magnificent book of the Kelmscott Press.  Known affectionately as the ‘Kelmscott Chaucer’, it brings together The Canterbury Tales (c1400) and other works by Geoffrey Chaucer, England’s most esteemed Middle Ages poet.  The book is rich and ornate in design, reflecting both Morris’ love of medieval literature and his socialist philosophy.  Essentially a throwback to the printing and binding methods of the 15th century, when quality of design and material was paramount, it is Morris’ last, great attempt to revive the art of hand-press printing, which he felt would soon be lost to mechanisation.

The Kelmscott Chaucer is a masterpiece of collaboration.  Among its 556 pages are 87 large woodcut illustrations, after the pencil designs by Morris’ Oxford University colleague Edward Burne-Jones, redrawn in ink by R. Catterson-Smith and cut in wood by William Harcourt Hooper.  While Morris experimented with typefaces, Burne-Jones spent every Sunday drawing, for the best part of three years, fearful that his friend might succumb to ailing health before the project was completed.  He gradually increased the number of proposed drawings from 48 to 60 to 72, before finally settling on 87.[1]  Morris accepted each change, and the process of adapting the pencil illustrations to woodblocks was entrusted to Catterson-Smith and Hooper, under Burne-Jones’ close supervision.  Complementing the illustrations were a total of 14 different full-page borders on 117 pages, 18 different frames around the pictures, 26 large initial words and many smaller initial capitals – all designed by Morris.[2] Detail from The Works of Geoffrey Chaucer

The Chaucer’s text, edited by Frederick Startridge Ellis, appeared throughout the volume in two columns.  In early 1892, two trial pages were set in ‘Troy’, one of the typefaces designed by Morris.[3]  Its type size was large, though, and Morris was not happy with the results.  Creating a smaller version of the same design, he had it cut and christening it ‘Chaucer’.  Its Gothic style perfectly counterposed the densely patterned marginal motifs which mimicked the patterned textiles and wallpapers he had popularised.  Surrounded by shoulder and side titles, and the occasional line printed in red, the whole was so magnificent, it led Burne-Jones to proclaim the work a “pocket cathedral”.[4]

All aspects of the Chaucer referenced characteristics of the medieval manuscript.  Its cover was no exception.  Aside from its provisional binding, the usual Kelmscott blue paper boards, Morris had originally planned for it four separate pigskin designs.  He had been impressed by the quality of work coming out of the Doves Bindery and turned to its leader, Thomas Cobden-Sanderson, for a 15th century style binding.  Cobden-Sanderson declined to produce a retrospective pastiche, instead encouraging Morris to produce a design the Bindery could execute.[5]  Due to growing illness, Morris was only able to complete one design.  He modelled it on a combination of South German works, including a 1478 Koberger Bible bound by Salzburg binder Ulrich Schreier, housed in his own library.[6]

In total, the Kelmscott Press produced 425 copies of the Chaucer.  Forty-eight of these exhibited Morris’ white pigskin designed cover, with its alternating rose and fleur-de-lys blind-tooled decoration and metal fastening clasps.  Thirteen copies were printed on vellum, with the remainder on handmade linen paper by Batchelor, featuring Morris’ own watermark.

Special Collections, at The University of Adelaide Library, holds facsimiles of the Kelmscott Chaucer.  A particularly fine edition, on display, has been printed for The Basilisk Press, London, by The John Roberts Press in Clerkenwell. The Works of Geoffrey Chaucer

William Morris, British textile designer, author and socialist activist, was born on 24 March 1834 at Elm House, Walthamstow.  His parents, William Morris Snr and Emma Morris (nee Shelton) were affluent and provided him with a privileged childhood.  They moved in 1840 to Woodford Hall in Essex and again in 1847 to the Water House in Walthamstow, following the death of Morris’ father.  In his youth, Morris enjoyed reading and playing in the countryside, and developed an interest in the wildlife that surrounded him – a love for the natural world that would later influence much of his work.

He was educated privately at Marlborough College before entering Oxford University in June 1852.  Here he studied Classics but quickly became bored, developing instead a keen interest in Medieval history and architecture, inspired in part by the buildings of Oxford.   Encouraged by college friends such as Edward Burne-Jones, and the those of the ‘Birmingham Set’, he began to read romantic stories of medieval chivalry and self-sacrifice, all the while rejecting the encroaching and dehumanising industrial systems that he held responsible for poor quality, unnatural objects. From The Kelmscott Press: a history of William Morris's typographical adventure by William S. Peterson (University of California Press, 1991), p80

Morris and Burne-Jones travelled to France in 1855, visiting Medieval churches and cathedrals, and ultimately concluding they were better suited to a career in art than the Church.  Though Morris went to work on his return with leading Neo-Gothic architect, George Edmund Street, he spent much of his time with his Birmingham Set colleagues, establishing The Oxford and Cambridge Magazine.  Funded primarily by Morris’ generous inheritance, the publication featured tales, poetry, critiques and social articles, many of them his own, and it received significant praise from contemporaries such as Tennyson and John Ruskin.

Increasingly dissatisfied with architecture, Morris abandoned his apprenticeship in 1856 and turned his attention to writing poetry and the design of illuminated manuscripts and embroidered hangings.  In 1857, he met Jane Burden, a local stableman’s daughter, and when the pair married two years later, Morris was afforded the opportunity he’d always longed for – to build a property medieval in spirit that would accommodate not just his family but a craft-based artistic community.[1]  The result was ‘Red House’ in Kent.  Morris and Jane, with the help of creative friends, spent two years furnishing the house, decorating its interior with hand-embroidered fabrics, and painting murals (some based on Geoffrey Chaucer’s stories), on the walls.

In 1861, inspired by the success of their efforts, Morris and six other partners, including Burne-Jones, established the Morris, Marshall, Falkner & Co. decorative arts company.  With an emphasis on quality, the firm returned to Medieval Gothic methods of craftsmanship to produce everything from furniture, architectural carving and metalwork to stained glass windows and murals.  Morris also researched and revived historical printing and dyeing methods, and in 1862 designed what would be the first of many wallpaper patterns.  Known simply as “Trellis”, it combined bluebirds and climbing roses with a background of wooden squares, to create a classic still available for purchase today.

Photograph of Edward Burne-Jones (left) and William Morris (right) at the Grange, 1874
(Scanned from Christopher Wood, Burne-Jones, London, Phoenix reprint fo 1997 edition, 1999)
Over the next decade the firm established a reputation for quality and creativity, and Morris became one of the most significant figures in the Arts and Crafts movement, which, in turn, would influence the Art Nouveau movement.  The company was commissioned to decorate a new dining room at the South Kensington Museum (now the Victoria and Albert Museum), and another at St. James’s Palace.  By 1875, Morris had become the firm’s sole director and he continued to design at an impressive rate for the newly named, ‘Morris & Company’.  Some 23 woven fabrics, 32 printed fabrics and 21 wallpapers, along with more designs for carpets, rugs, embroideries and tapestries, were added to the collection and sold in the shop Morris opened on Oxford Street.[2]  He had made enough capital to purchase, in 1881, the London textile factory Merton Abbey Mills which allowed him to bring together all of his workshops in the one place. In his later life, Morris became increasingly disillusioned with politics.  Appalled at the growing class divide and particularly the poor living conditions of workers and the pollution caused by industry, he set up a new group in 1884 called the Socialist League.  As its leading figure, Morris embarked on a series of speeches and talks on street corners, in working men's clubs, and in lecture theatres across England and Scotland, advocating proletarian internationalism.  He also served for six years as editor of the League’s newspaper, Commonweal which contained contributions from prominent socialists and his own articles and poems.

Having returned to his ‘Kelmscott House’ in Hammersmith, Morris spent the latter part of his career focusing on his writing.  He established the Kelmscott Press in 1891 which printed and bound more than 50 titles in his beloved medieval style, and all with the typefaces, initial letters and decorative borders of his own design.  The greatest of these, published shortly before his death in 1896, was the ‘Kelmscott Chaucer’, a fine edition comprising Geoffrey Chaucer’s The Canterbury Tales (c1400) and other works.