The University of Adelaide has been justly proud of its relationship to William Bragg and his son Lawrence for over a century. Articles about the two have been proudly punning on their surname for almost as long – see here for the latest.

But unlike some of the other famous scholars associated with the University (Howard Florey for example) the nature of the achievements of the Braggs has always been somewhat obscure to the less scientifically literate among us – a joint Nobel Prize for the development of something called X-ray crystallography had been the extent of my understanding. 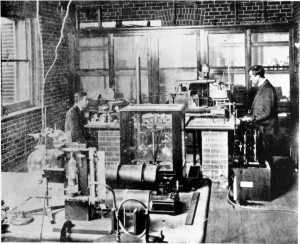 William Bragg in his Laboratory, circa 1900. From UAA online exhibition "William Henry Bragg and the University of Adelaide".

A man who for over two decades has made it his mission to illuminate the nature and scope of the Braggs’ achievements is Dr. John Jenkin, currently Emeritus Scholar in the Faculty of Humanities and Social Sciences at La Trobe University. Jenkin, a graduate of the University of Adelaide, worked as a physicist of some note before turning his hand to the history of science with his focus being William and Lawrence Bragg.

Jenkin’s background has put him in a unique position to educate, demystify, and promote the achievements of the Braggs and their legacy. The culmination of this process was the publication in 2008 of his detailed and highly readable account of the Braggs, William and Lawrence Bragg, father and son: the most extraordinary collaboration in science (Oxford, UK: OUP, 2008). This built on Jenkin’s previous research into various aspects of the Braggs in Adelaide, much of it conducted in the University of Adelaide Archives. 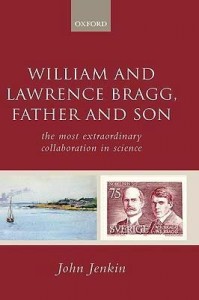 Here is his introductory summation of the importance of the Braggs:

If the seventeenth century saw the first scientific revolution, then surely the twentieth witnessed the second, the first half dominated by the physicists and the second half by the biologists. The scientific, engineering, medical, and social implications have been enormous, and they will be even more profound in the future….How did this dramatic shift occur mid-century? Primarily because, early in the century, William and Lawrence Bragg had invented a technique that employed X-rays to discover how atoms are arranged in the materials that make up our internal and external worlds. They invented X-ray crystallography, and it was this, for example, that both enabled the electronic revolution via solid-state components and yielded the structure of DNA.

John Jenkin has naturally been involved in the flurry of activity surrounding the recent celebration of several Bragg-related anniversaries – the 150th anniversary of William Bragg’s birth and the 70th of his death, as well as the centenary of Lawrence Bragg’s formulation of X-ray diffraction and the opening of the field of modern crystallography. These have included the recent Joint Meeting of the Asian Crystallographic Association (AsCA) and Society of Crystallographers in Australia and New Zealand (SCANZ) which incorporated a day long symposium on the Braggs. Earlier in the year the new Institute for Photonics and Advanced Sensing(IPAS) building was officially named ‘The Braggs’ after William and Lawrence. There has also been recent media coverage including from ABC TVand BBC radio. 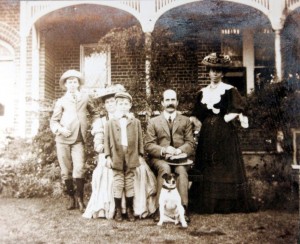 For the University Archives’ part, we have collaborated with the Barr Smith Library’s Rare Books & Special Collections to produce an online exhibition that brings together a substantial collection of primary resources on William Bragg. These include records of William Bragg’s application and appointment to the University as Elder Professor of Mathematics and Experimental Physics in 1886, his teaching and research at Adelaide, the Braggs in Adelaide society, first hand accounts of experiments and digitised publications. Remarkably, you can listen to audio files and even watch footage of William Bragg speaking on various aspects of science and his career. Professor Bragg was known as a lucid and engaging speaker so it’s intriguing to have the opportunity to hear and see him. (Windows users can download a free universal media player here should they encounter problems playing the video file). 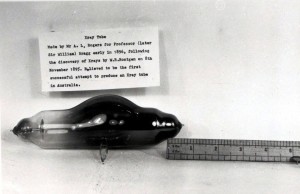 X-ray tube made by A.L. Rogers for Professor W.H. Bragg in early 1896, closely following the discovery of X-rays by Rontgen. This is believed to be the first successful attempt to make an X-ray tube in Australia. From UAA online exhibition "William Henry Bragg and the University of Adelaide".