In 1919, within weeks of arriving back in Adelaide ifrom Toronto Canada, Thorburn Brailsford Robertson had published a stinging attack on the pitiful amounts that Australia was spending on scientific research in comparison with countries such as Japan.

At that time the buildings assigned to the Adelaide Medical School were limited to the southern section of the old Prince of Wales Building and to the Anatomy Building block, with cramped and abysmal facilities.

With quiet insistence, Robertson set to obtain improved facilities. The Council of the University obtained from the Government part of the old Artillery and Mounted Police site, and a donation of £15,000 was obtained from the Darling family.

Robertson planned the layout and the world-class facilities were designed to Robertson’s specifications regarding lighting, furniture, fixtures and equipment. Most of the woods and materials used were local, the benchtops made from NZ kauri for its close and even texture. The Medical Library was designed to ultimately accommodate 70,000 books. The teaching laboratories were designed with wedge shaped tables so the microscopes of students further away from the windows would not be in the shadow of students closest to the windows. The Professor’s Private Laboratory was designed with a single entry door through the Professor’s office for uninterrupted work. The cost per cubic foot was 16 pence, including fittings.

The Darling Building was officially opened on May 5 1922 and housed Histology, Physiology, Biochemistry, Pathology, Zoology and the Medical Library. It was named in honour of the late John Darling Junior.

An extensive description of the physical nature of the building was compiled by Robertson in collaboration with the architect, W.H. Bagot and published by The Hassell Press in 1922. 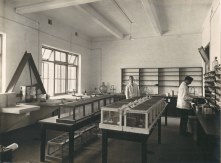 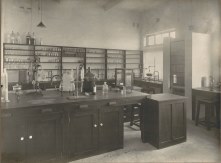 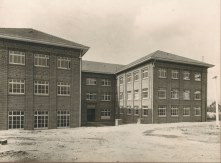 1. An account of the Darling building of the University of Adelaide / compiled by T. Brailsford Robertson and Walter H. Bagot (Adelaide: Hassell Press, 1922)
2. Letter from Professors Robertson, Cleland & Wood Jones. 5 May 1921. Regarding the naming of the Darling Building