While some Physics classes had been taught by the legendary mathematics Professor Horace Lamb since 1876, arguably the real beginning of Physics at the University of Adelaide was in 1886 with the arrival of William Henry Bragg as the Elder Professor of Mathematics and Physics. Research and teaching were Bragg's dual occupations at Adelaide for 22 years, including time instructing his son, William Lawrence Bragg, who graduated from the University in 1908.  The two Braggs went on to earn the Nobel Prize in Physics in 1915, the work having begun in Adelaide and completed in England. Lawrence remains the youngest ever recipient of the Nobel Prize, at age 25.

Kerr Grant succeeded William Bragg as Professor of Physics in 1909. Over his long tenure stretching to 1948, he maintained a small but important teaching department with a variety of research interests. A popular local figure in Adelaide through his public lectures, Kerr Grant led a department with real relevance for the local South Australian community.

The character of the Physics Department transformed dramatically in the post-war years under the stewardship of Leonard Huxley and John H. Carver.  Staff numbers grew, and internationally-focused research became an essential part of the culture. Through several key appointments, and the organisation of research into groups with critical mass, the Physics Department became an internationally-known research department with a proud history of quality teaching.

Physics at the University also included a separate Department of Mathematical Physics begun in 1951, led initially by H.S. (Bert) Green, and later by Angas Hurst.  While a small department, it had a remarkable international reputation for scholarship.

Professor of Mathematics and Physics 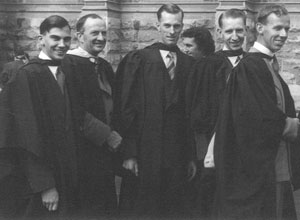